Heavyhands Workouts Are Off And Running 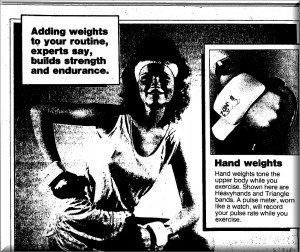 There’s more to today’s jogger than running shorts and shoes.

Heavyhands, Lace Weights, weight vests and pulse meters are likely to accompany exercises as they tone and moan, and retailers report swift sales of these accessories.

Heavyhands is the “real craze” at Eby’s Sporting Goods, Westdale Mall, according to store manager Holly Netolicky. The idea behind the red foam-covered solid steel rod and aluminum handle is to tone the upper torso while exercising the legs. Weights from 1 to 5 pounds can be attached, and Eby’s most popular seller is the 3-pound weight, according to Netolicky.

The suggested price for Heavyhands is $19.99, which includes 1 pound weights.  Additional weights are sold separately and range from $7.99 for 2 pounds to $19.99 for 5 pounds.

Triangle Bands, a member of the Heavyhands family, are popular at Sporty Lade, Lindale mall, according to store co-owner Lisa Miller. The flexible foam-padded and Velcro-covered band is $13.95 per paid, and fits either write or ankle.

Weights range from 1.1 to 3.5 pounds with bands in two sizes to accommodate exercisers with small measurements, Miller notes. She says the lowest weight is the biggest seller.

“Even 1 pound of weight gives a lot more stress.

You don’t need a lot of added weight because the repetition is what’s important.”

The weight glove, available at Five Seasons Sporting Goods, 3300 Johnson Ave. NW, is particularly appealing to female joggers, according to manager Steve Miller. Because weights are built into the back and palm of the glove, runners need not grip an attached weight.

“Women buy more of these because they’re more comfortable than Heavyhands,” says Miller.

Although upper torso weights can be used for any aerobic exercise, sources note most sales are to joggers.

“Because running is a very specific exercise, most runners will use weights to build up arm and shoulder strength,” says Lisa Miller.

Arm Weights are harmless for most joggers, according to Dr. Fred Pilcher, a member of the Linn County Orthopedics and Rheumatology group.

The added stress, however, he says, could cause trouble if the exercises already suffers back and shoulder muscle problems.

Two and 3-pound dumbbells are an important part of Mercy Wellness exercise programs, according to director Dagmar Munn.

Participants use the weights during aerobic walking and dance routines.

“When their muscles get tired in four minutes, they’ve had a real workout.”

“I’d been taking aerobic classes for about two years and my weight was good, but I wanted to be firmer,” says Kieler.

“Weights have increased my endurance and toned my muscles.”

Ankle and Foot weights also challenge the stamina of exercise buffs. Choices include Velcro-covered wrap-arounds, or lace weights which lace right through the shoe on both sides.

These weights are used mostly by football and basketball players to build leg muscles, according to Pilcher. He does not recommend ankle weights for general conditioning or jogging.

“Whether you’re a world class athlete or someone who hasn’t exercised much, the body can’t take that kind of stress,” he says. “Weights add stress and increase the impact of the foot hitting the ground.”

For any weight-exercise combination, Pilcher stresses caution and not doing “too much too soon.”

Weight vests, or bands are a challenge even to fitness “heavy-hitters,” according to Steve Miller.

The Logjammer, a foam-lined canvas vest designed and manufactured by Jack Zack, “allows the wearer to build up strength in legs and torso.”

The vest has 36 pockets, front and back, each capable of holding a one-and-three-eighths pound steel weight.

So Why Add weights to the already grueling routing of aerobic exercise?

“By using a 2- to 4-pound ankle weight,” says Munn, “you’re adding 2 to 4 pounds to your body weight and causing more resistance and causing your heart rate to increase. You’re helping increase your endurance.

“If you’re using 5 pounds at the most, you’re doing a nice, moderate workout for your heart and lungs.”

“The added weight means you work less time and get the same benefits,” adds Netolicky.

Exercises also can detect when weights would be beneficial. “In running or aerobic exercise, if you find you’re not working as hard as you used to when you first started, weights can really help,” says Lisa Miller.

In case you want to hear what your body has to say about all this added stress and weight, a pulse meter is on the market.

The unit is easily slipped into a pocket and records your pulse rate as you are exercising, according to Don Stepanek, assistant manager of Northtowne Schwinn Cyclery Ltd,. 1150 Blairs Ferry Road NE. It costs $89.95.

“We sell them mostly to people who have had heart problems, or who have started exercising on a doctor’s advice,” he says.

Finally, people are able to progress as far as they want using HeavyHands.