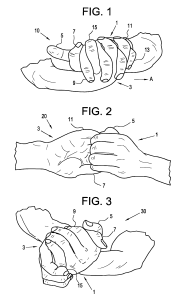 In a previous post on Isotonometrics, the question was asked: “So was this “isometrics”? Or “dynamic tension”? Or something else? That will be explored in a future article!” This is that article.

Dr. Schwartz’s extant writings interact from time to time with the systems advocated by other fitness experts who are mentioned by name, like Charles Atlas.  He is always courteous but clear about how his viewpoint differs and what advantages he believes it to have.

So how did Leonard Schwartz see his work in relationship to Charles Atlas’ “dynamic tension” and “isometrics’? The answer is found in his patent filing on “Fitness Method” with some observations drawn from the Charles Atlas course itself.

…the concept of dynamic tension or isometrics is well known, having been popularized by Charles Atlas many years ago. The concept of isometrics involves pitting one or more muscle groups against other muscle groups in a stationary fashion. Typically, one hand of an exerciser is pushed against or pulled apart from the other hand with the other hand imparting an opposite and generally equal force. Neither hand nor the exerciser’s body is typically moved during the pushing or pulling of the hands.

One of the drawbacks to the system of isometrics is the inability to generate sufficiently large workloads to involve the circulation (heart rate especially) appreciably. For one thing, the duration of each isometric exercise is too brief; for another the muscle mass involved in the exercise was generally too small. Consequently, isometric exercise only provides strength improvement and does not contribute to endurance, flexibility, aerobic training or the like.

Technically, Charles Atlas’ “Dynamic Tension” and Dr. Schwartz’ “Isotonometrics” are not “isometric” because they are not static holds. Movement is involved in each. Schwartz is correct though in that most Dynamic Tension and Isometric exercises attempt to isolate relatively small muscle groups, though some isometric exercises like the Kiveloff protocol seek a simultaneous “whole body isometric”.

For that reason, Schwartz says his isotonometric method involves “isometric like” action, i.e. limb to limb force and resistance:

The Charles Atlas course of exercises taught the development of the body’s various muscle groups by way of specialization and isolation. His exercises were varied. Some were “dynamic tension” with limb to limb resistance. Others were “isotonic” exercises… well known calisthenics like his pushup variation, deep knee bends, lunges and, even, running. In general, however, there was no emphasis on involving all the limbs or the majority of the body’s muscle groups at the same time. One exception to this is a modified “burpee” that is demonstrated by Atlas in Lesson 6, Exercise 2. From the squatting position, the legs are kicked back. It is not a commonly known burpee that usually starts and ends in the standing position and may include a pushup or many other variants. In general, however,  Schwartz’ assessment of Atlas’ dynamic tension approach and isometrics in general was correct regarding the tendency toward isolating individual muscles and muscle groups.

Dr. Schwartz’ method of “Isotonometrics” in contrast seeks to involve as much muscle simultaneously as possible (a common feature of all his exercise recommendations). To involve as much upper body muscle as possible, he advocates a form of “dynamic tension” with broad movements with as much range and muscle involvement as possible for the upper body while activating the lower body with trunk bends, twists, knee bending, stepping, and lunging. He also envisioned arm to leg resistance exercises and leg to leg resistance exercises as part of his system.

Though Dr. Schwartz advocated innovation and flexibility in arm movements to avoid boredom, some of his “handclasps” and “handtrails” resemble the Atlas system. For example, in Lesson 1, Exercise 3, Mr. Atlas has an exercise that involves pulling on an imaginary rope from head to thigh. The motion of the downward hand activates the “latissiums dorsi” muscles among others which pull the arm down and backwards while the motion is resisted by the bottom hand which activates the biceps, frontal deltoid, and trapezius muscles which pull the arm upward. Obviously to exercise both sides of the body, the dominant hand must be changed half way through the chosen number of repetitions.

The “rope pulling” movement and several others in the same lesson are perfectly in line Schwartz “Isotonometrics”… the difference, however, is that in Schwartz’ method they would likely be performed at lower tension to accommodate higher repetitions and in conjunction with lower body movements or even dance like movements.

Schwartz’ Isotonometrics had several similarities to the Charles Atlas system while building on the results of modern understandings of training to produce cardiac and general muscular endurance. Both incorporated “dynamic tension” and “isotonic” (calisthenic) exercise though not technically “isometrics” in the form of the static holds studied, for instance, by the Max Planck Institute. Unlike Atlas, Schwartz consciously used predominantly upper body dynamic tension work to replace the use of hand weights for that purpose. Whether using weights or “dynamic tension”, the use of the upper body along with traditional lower limb cardio was to mimic the high oxygen processing of Nordic skiers while minimizing the stress and injury potential on any one body part.

There is a enough similarity in outward exercise forms between the two systems that a number of upper and lower body exercises from the Atlas course could conceivably be combined to form “whole body” movements. If those cojoined exercises were performed with a tension that allowed the activation of muscles for long enough time to create an aerobic effect, the untrained eye could not really tell the difference between the Atlas dynamic tension and isotonic moves combined and adapted for endurance training and the Schwartz Isotonometric moves.