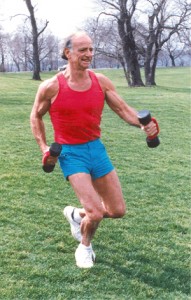 Though with each passing month the newsstands are filled with new magazines, books, and articles promoting the latest weight loss or exercise “secret”, the truth is an unsung hero created a method of exercise a few decades ago that would help most folks gain the physical prowess and ability to burn fat they crave. His name was Leonard Schwartz and he, himself, was walked the path most of us face. Fat, out of shape, and a chronic smoker… he was no candidate to live as long as he did. Nobody would have ever guessed the slight psychiatrist would go down in history as an exercise visionary!

Convinced in his 50’s of the need to change or die, he took up the recommended exercise protocol of his time: “aerobics”, i.e. “jogging”.  That started to work. Jogging 1500 to 2000 miles per year, his racing heart rate slowly dropped from 80 beats per minute to 60. That was slow progress to him, but it was better than nothing. The reduction in resting heart rates indicated his growing fitness, yet he did not find it satisfactory by any stretch.

About that time, a hamstring injury sidelined him. He was left needing to exercise aerobically, but unable to follow the medical advice of the day. He was forced to start searching for an alternative. He found his answer in the exercise research. Cross country skiers who used their arms AND their legs to exercise processed more oxygen and had greater aerobic capacity than any runner. So why did the “experts” only focus on using the lower extremities to exercise?  He started to search for a way around his hamstring injury that made running impossible.

First he tried swinging a baseball bat while doing deep knee bends. Ultimately he chose a different path, but the quest for a “full body” aerobic (hence the name “panaerobic”) workout never left him. Every exercise method he developed thereafter emphasized the principles he discovered after that hamstring injury:

Simultaneous Exercise – like those cross country skiers, the most aerobic benefit with the lowest level of perceived exertion comes when as much muscle mass is harnessed as possible. That means all four limbs are engaged and working together! Why? Because the arms and upper body are as effective “aerobic drivers” as the legs… and, because, compared to the legs, the aerobic capacity of the upper body has much more “upside potential”.

In plain English that means lifting HeavyHands properly during a 2.5 mph leisurely walk easily make the aerobic effect of a slow walk comparable to a 6 mph job without hand weights! Mimicking a cross country skier (the “Double Ski Pole” exercise) is perhaps the most aerobically powerful single exercise ever tested by the University of Pittsburgh scientists who helped Schwartz prove his every assertion!

Strength and Endurance – It wasn’t until Dr. Schwartz started working out with his “HeavyHands” weights that his heart rate moved below 60 down to the rate of approximately 40-50 beats per minute. When he added “strength moves” such as Double Ski Poling which he could perform with over 20% of his bodyweight for over an hour, his heart rate settled at 35 beats per minute!

Oddly enough, his HeavyHands method called for deceptively low weights. While strength athletes might lift hundreds of pounds in the Bench Press, Squat, or Deadlift in single lifts, all but the most advanced HeavyHands moves could be done with weights under 15 pounds! The difference is that Schwartz’ sculpted body, superior aerobic capacity, and great strength per pound (more on that later) came through high repetition exercise and increasing weight loads over time!

In fact, at times the lower the weight, the better! Ideally, the weights would be lifted repeatedly to “Level 3″ (moved overhead from the starting position at the hip). The people who “tried” HeavyHands and found it inadequate (even supposedly sophisticated researchers) failed because, universally, they assumed the small weights were to be “carried” instead of hefted quickly and repeatedly throughout the course of exercise.

Before moving on to the main topic of this article, it pays to ask just how strong and enduring was Dr. Schwartz?

Tom Furman relates this incident that is perhaps the most dramatic:

In 1982 Dr. Leonard Schwartz wrote, “Heavy Hands, The Ultimate Exercise”. It is an enjoyable book that is fascinating till this day. It contains many exercises including the “double ski pole” exercise. This motion follows the patterns of a Cross Country or Downhill Skier driving his poles into the snow and applying the full force of the body. Dr. Schwartz’ exercise uses handweights and a lunging step. You can do it on a track, uphill, (downhill can be tricky!), or in the small confines of an apartment. You can stand in one spot with a foot in a cast and do it as well. According to Len Schwartz, this exercise has the highest aerobic out of any upright movement.
In his experiments, the good Dr. has done this exercise with 23 % of his bodyweight for two hours. He logged 4200 arm cycles and 16,800 small paces. At 132 lbs. of bodyweight, this works out to be around 30 pounds total or two 15 lb. Heavy Hands. Previously he would spend days in bed with back pain. (Previous to changing his lifestyle). He said his back felt absolutely supple after this workout.

As Furman asks… could you do 4200 reps with two dumbells each weight over 10% of your bodyweight? That remains an astounding display of strength and endurance!

Weightlifter John McKean who posed for photos in Dr. Schwartz’ “HeavyHands Walking Book” related in some personal email that before his death Dr. Schwartz performed 1200 pushups during the commercial breaks of a Pittsburgh Steeler’s game. On an exercise device he created for bodyweight exercise called the “Pan-X”, Dr. Schwartz could perform 35 chinups in the “L-position”… a sign of excellent arm and abdominal strength.

So why can we call HeavyHands a unique contribution to the field of exercise and weight loss?

Hopefully the first part has been answered. Dr. Schwartz himself was proof enough that a chubby and out of shape psychiatrist could become a lean, sculpted figure! His exploits of “strength endurance” are unparalleled in some ways. The scientific references that populate his books prove that Schwartz had found a way to drastically reduce the time and perceived effort of productive exercise!

But what about weight loss?

Here are some reasons Dr. Schwartz gave regarding HeavyHands’ unique ability to help people lose or maintain their weight:

• [HeavyHands users experience] a range of 30-300% increase in energy consumption (The Physician and Sportsmedicine, June 1987)

• Heavyhands can be practiced for relatively long periods, i.e. between half an hour and two hours at a time, or in 5-10 minute “exercise bites” throughout the day.

Why is that? Dr. Schwartz exercise patents give a clue as to “why” HeavyHands is so powerful for fat burning. He believed that the muscle created when users performed “HeavyHands” were unique. They had increased numbers of “mitochondria” to power them. It’s these cellular furnaces that may facilitate easier weight loss than the muscles of sedentary folk.

As strange as it may seem, despite the benefits, despite the relatively low cost or training to start, and the amazing benefits of HeavyHand exercise… the exercise has in many ways died out. Surely Dr. Schwartz’ untimely death was partly to blame. Soon after his passing, manufacturers exited the market. There was much more profit potential chasing the “latest greatest” fad it seemed.

Still, some people recognize the value of Dr. Schwartz’ work still today. For them, HeavyHands weights are occasionally still available on Ebay.com … their supply is sporadic and the selection of weights is generally pathetic.

Thankfully entrepreneur Michael Senoff of WeightedHands.com began producing replacement weights and also specialized ergonomic handles for “HeavyHands” exercise, the prospects for finding new equipment were virtually nill. Now, thanks to Senoff, the HeavyHands enthusiast can progress from the smallest weights used at the beginning to the heavier weights required for maximum strength endurance development. Finally, people are able to progress as far as they want using HeavyHands. Once again, Dr. Schwartz’ proven methods are helping a new generation of exercise and weight loss enthusiasts.

Is There A Place For Weighted Hands In Sports . . .