Psychoanalyst’s answer to aerobic exercise is his own ‘Heavyhands’ 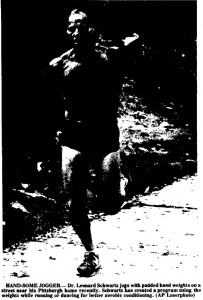 Psychoanalyst’s answer to aerobic exercise is his own ‘Heavyhands’

Pittsburgh (AP) – Psychoanalyst Leonard Schwartz beckons his patients to come in and sit down, then to get up with weights and run around – therapy he prescribes to build the body and massage the mind.

By clutching small barbells as they run, his patients strengthen their arms as well as their legs and develop better self-images.

“I see not only parallels between mind and body, I consider mind and body one,” said Schwartz, 57, who claims his new exercise program, “Heavyhands,” makes followers look and feel better.

Until he was 49, Schwartz avoided strenuous exercise. He carried 147 pounds on his 5-foot-7 frame, suffered from high blood pressure and smoked several packs of cigarettes a day.

One day he decided his body needed help.

“I started running and I built a swimming pool,” he said. “I started all those aerobic schticks.”

“That was all self-serving, narcissistic business. I was concerned only about my own body and my wife’s. Then I started thinking about it more as a physician than as a mere consumer of exercise.”

Schwartz discovered the secret was to clutch small weights in each hand while he ran, danced or simply touched his toes.

“It’s an over-kill philosophy,” he said. “You heavy the hands to make them light.”

“I need a comprehensive exercise…I wanted a form of exercise that incorporated more of the fitness factors than any other system did,” he said.

After a few years of almost daily workouts, Schwartz’ weight dropped to a muscular 132 pounds.

His resting pulse rate shrunk from 80 to 38 a minute, and his oxygen-consumption rate more than doubled.

Every part of this body improved, something no other aerobic exercise ever accomplished, Schwartz said.

“ ‘Heavyhands’ is an endurance dominated, or aerobic exercise like all the others. But it’s a combined form of exercise – the simultaneous use of four limbs and the trunk. There’s a terrific emphasis on the upper extremities, which have been neglected historically, even in swimming,” he said.

“There is no belly or back aerobics besides ‘Heavyhands.’ Since there are 75 million people in the country with back problems, I thought I had to address that problem.”

More calories are lost, as less effort is exerted, according to Schwartz. And anyone who is reasonably healthy – young or old – can follow the program, he said.

It’s not that other forms of exercise aren’t good – they’re just not as good, according to Schwartz.

Although between 75 million and 135 million Americans profess to exercise, not more than 3 percent or 4 percent of them actually are fit “in the ultimate sense,” Schwartz said.

“The Jane Fondas, the Richard Simmons, are really doing a lot to raise national consciousness about the issue of movement and activity and health,” he said. “Mine is more research-oriented. It’s based on myself and other subjects…anybody I can get into the laboratory.”

So far, Schwartz has taught his family, friends and colleagues how to exercise the “Heavyhands” way. He’s held exercise sessions at Montefiore Hospital, where he is chief of the psychiatric division, and at home for the elderly. And he’s organized a short daily run – with weights – through his neighborhood.

Interest has swelled since his book on the subject, entitled “Heavyhands,” was released in May. He’s appeared on television and radio programs and has been featured in national magazines.

He hopes to use profits from his book and a set of weights he’s designed – padded barbells that cling to the hand – to establish a large laboratory where he can perfect the method.

“It’s difficult to understand how anybody with the option to exercise could abandon that option,” said Schwartz, who sets aside four hours a week for “Heavyhands.”

“When I know I can run 10 or 12 flights of stairs without any difficulty at all, or if I can run 19 miles pumping a couple of 8-pound weights all the way, anything less than that seems to be substandard.

“But I wasn’t always that way.

So it’s obvious anyone can convert.”

Finally, people are able to progress as far as they want using HeavyHands.

The Difference Between HeavyHands And Kettle Bells (And When To Use Each) . . .